The Importance of Nutrition in NC Mountain Towns

Nestled in the Blue Ridge Mountains, Newland is a beautiful and picturesque small town. The mountains define the skyline, the downtown is a quaint culmination of a few shops and restaurants, and the people go about their day-to-day routines.

Similar to other mountain towns in WNC, hunger and food insecurity are an issue for many in Newland. 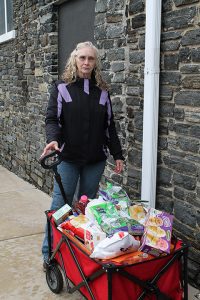 “Food pantries are what keep the people eating out here,” says Willa, a senior citizen residing in Avery County who came by the MANNA Community Market (MCM) at the Old Rock School in Newland on February 13th.

Although the MCM wasn’t distributing food until 12:00 PM, people began to line up as early as 8:30 AM. By the time the distribution began, hundreds of people already lined the walls of the gymnasium awaiting the opportunity to bring home some nutritious staples.

“When you’re 73 years old, you get barely any money from the government and you can’t afford healthy foods,” says Willa. “Leaving today, I got enough healthy food to stock my fridge.”
In WNC, 1 in 6 people are food insecure – meaning they are unsure where their next meal is coming from. For children in our region, that number is 1 in 4. While hunger is a problem throughout our entire country, WNC faces the brunt of the issue. In fact, NC ranks in the top ten hungriest states.

According to Willa, part of the reason food can be a struggle in Newland is because job opportunities are thin – especially for older residents. “No one wants to hire and train someone who is 73. At this point, the only job I could find out here would probably be something where I’m washing dishes, which I physically can’t do.”

Even for those working, putting food on the table is tough. 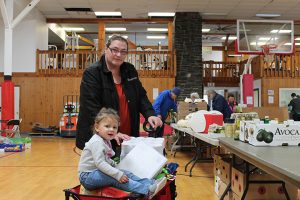 Megan, a client at the MCM in Newland, knows this first hand. “It’s really tough to make ends meet with children, even when you’re working,” she says. “The food we get from Old Rock helps feed our family for a month. And we’re able to find Hennsleigh some healthier options.”

Of the 19.8 million pounds of food distributed by MANNA in the last fiscal year, 63% were nutritious staples and 29% was produce. Mobile deliveries through MANNA Express and the MCM average over 50% fresh produce alone.

At the MCM in Newland, the nearly 270 people who received food had the choice of bringing home a wide variety of fresh foods: oranges, apples, mixed greens, green beans, black beans, cabbage, cauliflower and peppers, as well as, baking ingredients and a variety of beverages. Beyond food, clients also had the opportunity to bolster their kitchens with other staples like cooking utensils, pie plates and more.

For those who may not have known how to use some of the food items or were looking for fresh ways to cook food they’ve cooked many times before, members of our Nutrition Works team were there to show them. Set up near the entrance of the gymnasium, our Nutrition Works team led cooking demonstrations using food available at the market, and provided tasty samples for those picking up food. 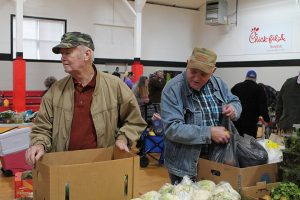 All of our programs, whether it is the MCM or our MANNA Packs program, strive to not only provide clients with food, but to provide them with nutritious choices, so that they can have a balanced diet and lead a healthy life.

As Tony, an older client at Newland, stated after putting a bag full of cabbages in his car and filling a box with a mixture of produce, “I love my leafy greens.”